When you love the older body styles but need the performance of a newer car, what do you do? Swap it! In comes a 2000 Subaru Impreza. Absolutely base stock, it is a blank canvas. We start tearing the car apart, everything had to go. We mean everything! We took the car down to a complete shell - only the body remained. Acquiring a 2006 WRX donor car, we got to work putting the car back together. The EJ255 was built with an IAG shortblock, stock heads, and ARP hardware. We put on a VF48 turbo, upgraded the fuel system, added an external wastegate setup and a stage 2 competition clutch. Before dropping the engine and trans in, we went through and shaved and painted the engine bay to give the EJ255 a completely factory look. Next came the suspension and drive line, the 06 WRX rear diff was installed along with WRX performance brake calipers. Hawk performance pads and rotors completed the brake set up and a fresh set of coilovers were installed. The swap wasn't complete there. On the interior we did a full 2006 WRX dash swap, fabrication his entire interior firewall to accommodate the new hvac set up and controls as well as the crash beam. For a near perfect OEM fitment we also welded all new mounts for the dash while removing the old ones. With the dash fitted up it was time to make it all work. For 3 days we rewired the entire car to incorporate all the new sensors and controls. 2008 WRX seats were installed with a set of custom in house fabricated brackets and rails. A 04 STI gauge cluster, Glowshift gauges, and new carpet were all installed after we did a full interior sound deadening. For the exterior a custom rear wing was factory to match his deck lid and over fenders were installed for a thick tire set up front and rear. There you have it, completely updated vehicle with OEM fit and functionality without any sacrifice of the old body style. 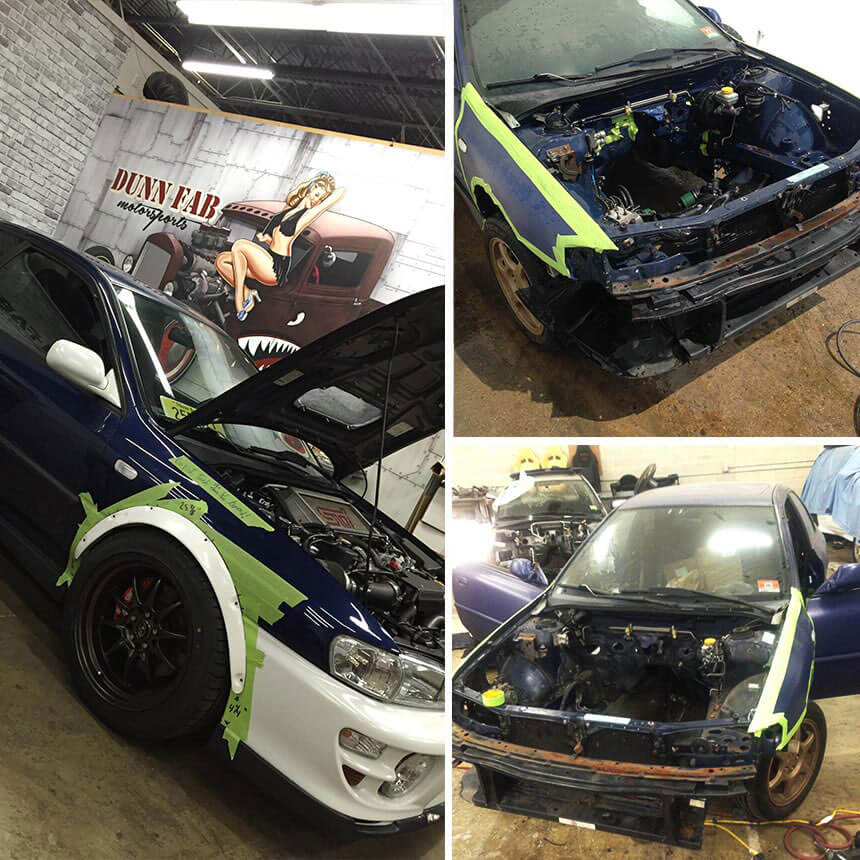